JET CITY AMPLIFICATION... First gig with my new head, the all valve JCA20H

I had my first gig with my new head a JET CITY AMPLIFICATION  JCA20H all valve 20 watt head.

The gig on Monday was a great night. We had been due to be first on of three or four depending what poster you read, but in the end we were main support. Main support at The Underworld ain't bad for gig number 3!

The guys from NINJA GUN were great, and I borrowed a cool old Marshall 1960A to run the head through from them. It was an unusual night for us though because we played as a four piece with just one guitar. Stevi couldn't make this one so Mr Sober Dave took over on bass for the show. I did feel a little exposed being on a decent sized stage with no rhythm guitar to hide being, but I soon got over that when we started playing. 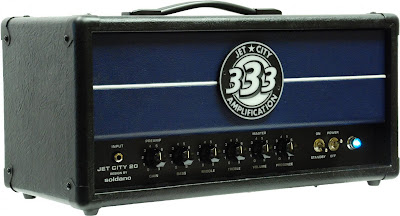 This is it, the JCA20H, it looks great and has a blue light on the front.
Plenty loud enough to gig with and at about 10kgs light enough to get places without having to spent the next day in bed. That really is  a big plus for me, I've always been quite happy with my MARSHALL TSL601 combo but at about 30 kgs it's just to big for me to get around, so I started looking for something lighter and I found this! It's still a good size, I wouldn't describe it as a Mini-head in the Orange Tiny Terror style, but it's probably 2/3 the size of my old TSL60 but a lot lighter.

Here's a youtube video I put together from a few of my favourite solos from the gig so you can here what it sounds like and marvel at the little blue light!


I'm looking forward to a lot more gigs with this behind me!
Posted by Rob Silver at 9:42 AM