‘As soon as they launched into their first track it was obvious this was going to be awesome’ the last PISTOL KIXX review...

I just came across what will be I guess the last PISTOL KIXX live review. Check out this months OXFORDSHIRE MUSIC SCENE. I guess it's cool to end on such a good review, and I even got my glorious sideburns into the magazine which is making me smile more than it should.

Hopefully we'll all be back out there playing live in various bands as soon as possible. I for one am itching to get out there and play lot more guitar behind my head, like the show off twat I am!
Full review below: 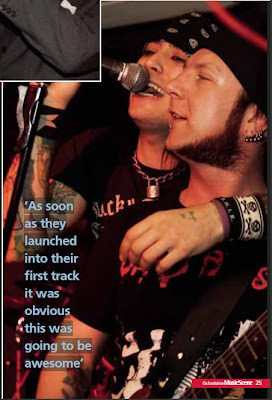 Pistol Kixx prepared to rip our
ears from our heads. After our
earlier listening delights this was
tantamount to Damien Rice
warming up for Lamb of God –
one of the great things about
every Punt. As soon as they
launched into their first track
with a snarl and a swagger, it was
obvious that this was going to be
awesome. “F****** hell, it’s a
Wednesday” were lead singer
Carli Hart’s first utterances, and
he was right night would have been more
forgiving to this assault of sleaze
ridden guitars and bleachwrecked
vocals. They gave their
all – falling around each other
and off the stage into the
audience not giving a damn, it
was as rock n’ roll should be.

PISTOL KIXX has broken up... 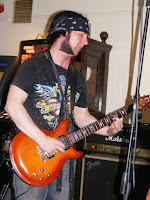 We had what turned out to be our last gig last week.
There had been some tension for a while, but then again if you make 5 ego-maniacs hang out in close proximity that will always happen.
I thought we were going to be all ok, but after half a song, Dave stormed off stage after a bit of a rant from Carl.
We finished the show with just me on guitar, then there was some shouting and people screaming "You fired" like Alan Sugar on speed at each other...
Next day Me, Dave and Colin decided to form THE SOHO COBRAS, Stevi decided he was up for it as well so we'll be writing and rehearsing new stuff soon. We'll be using a a few PISTOL KIXX songs and rewriting a few so we're not using Carl's lyrics. Carl will I'm sure be starting a new band very soon as well.
See you soon at a dingy venue near you!
Long live THE SOHO COBRAS!
Posted by Rob Silver at 2:47 AM