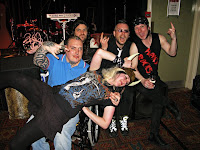 We played in Oxford on Friday. I hadn't really been back there since PISTOL KIXX broke up, so it was really cool to get  there and say hello to some familiar faces. Again, a big thank you to John for booking us and having the faith to give us a gig before he'd even heard a note.

We had quite a wait between sound check and playing so we did sink quite a few drinks... maybe to many, but things were a lot more relaxed now that we have gotten rid of the first gig nerves.

I did get to meet some interesting locals while standing around boozing including the owner of possibly the nerdiest and most glorious tattoo I have ever seen. Check out these winged storm trooper helmets! Who would have thought to combine tits and Star Wars in a single tattoo...? This chick, that's who! :-) 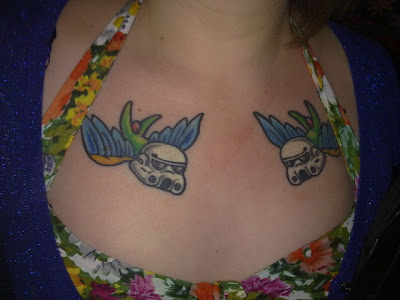 The gig itself was great fun. The sound wasn't so good, but now that we've lost our live cherry we were all giving it a bit more in the jumping around and gin-spitting departments.

I did have some technical problems which threw me a bit. My guitar kept sounding like the volume was backed off no matter what I did, and then my crappy Behringer tuner froze on me... (time to finally buy the Boss one I've been promising myself.) I spent most of the night convinced that my fantastic Marshall TSL601 was on it's last legs, but once I got home and had a chance to look into it, it turns out my pick-up selector switch was full of dust and crap and wasn't connecting properly. It all seems fine now, but worst case scenario, I have to replace a £10 switch rather than an £850 combo, so it's all good.
It did mean however that the guitar sound wasn't great on the night and kept cutting out on me, but I put on  a brave face and did the best I could.

We also unveiled our comedy cover. WARRIORS OF GHENGIS KHAN by BAD NEWS.


The sound isn't as good as the video from THE GAFF, but I think that's half down to my guitar sounding a bit shit and the sound in the room just not being as good.
Still, having said that it was a great night.

I can't wait until the the gig at The Underworld in Camden on the 29th of March.
Posted by Rob Silver at 6:29 PM