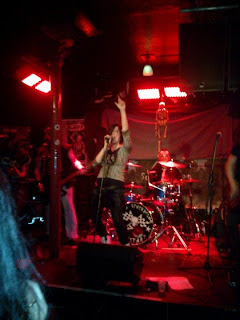 All nerves disappeared once I was actually in the venue. THE GAFF  is cool as fuck can I just say. We all got a few drinks in us, actually got a sound check despite being on first of four and had a really cool time.

It was just a total blast from start to finish. The actual gig was great. Everything went so well, and this line-up fucking rocked! I knew Hazel was quite "extroverted" shall we say, but I was  so impressed to see her throwing herself into things like the gin-fueled rock-lunatic she is :-)

Usually me and Dave make it our job to jump into the people and generally make menaces of ourselves, but in the end we just sort of let Hazel fly free! She was menace enough for all of us on Friday :-)

I think with it being the first show as well, I was a little more subdued myself, I just wanted to make sure we really could play the shit live!

Turns out we can!

It was great night guitar wise.

I got to play through a really cool Marshall Mode four stack. A big thank you to Davey from New Gen for letting me borrow it. It was really cool. The only guitar fuck up I had was a little wobble in the solo to "Boyz Night Out" but I think I covered it well, and bearing in mind that I still couldn't play that solo standing up last week, I think I did OK.

It was brilliant from start to finish!


There was one particularly funny moment during New Gen set. They ended with The Ramones "Blitzkrieg Bop" and got everyone from the other bands onstage to help out with the "Hey Ho's" and so on, I finished my drink mid "Hey ho" so I lobbed my glass into the crowd without thinking (It was plastic, I was being exuberant/antisocial not a psychopath) and it hit this chick in the front row right between the eyes

She took in the good humour it was intended though, so I didn't have to have a fight with her boyfriend.

Apparently in the same song, Hazel snogged the singer from Vanity Ink, while I was standing next to her, but it seems that I was so caught up in drunkenly shouting "hey ho, lets go" that I missed the sapphic floor show next to me.

Anyhow, I have just uploaded videos of the whole set to youtube so here we go: