Been offline for a while...

Thanks to the untimely death of my laptop, updates have been a bit thin on the ground, but i'm getting a new one in a few days so expect a pile of new guitar stuff.

The covers gig went really well, but the bloody camera ran out of battery half a song in, so there's no video, which sucks, because I rocked! Rehearsals start for the next covers gig next week though. It's going to be really fun, and we're even playing a Winger song! :-)

I have been recording for a new band though. EIGHTBALL VOODOO is an online collaboration between a few geographically displaced sleaze heads...

I had a little smile on my face today because we got a little mention on the mighty sleazeroxx.com! 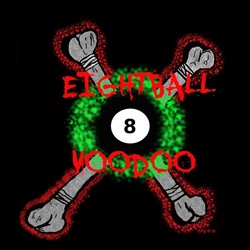 Eightball voodoo was formed in 2010 by Jay R, the former lead singer and award winning frontman of leading U.K sleaze rockers, JackViper. Jay has recruited the rest of the band of talented rockers from around the world. The low slung guitar attack is led by Rob Silver of The Soho Cobras and formerly of Pistol Kixx and Deangersmith, legendary South African guitarist who has played with numerous important bands from the South African rock/metal scene and more recently the British heavy metal band Mouthful of Flies. Bringing massive thundering metal style drumming is Ralph Margo formerly of Misericord and now also with South African metalheads, Boneyard.

Between them they have logged up multiple releases, soundtracks, hundreds of live shows, radio and television appearances, magazine, newspaper and webzine features and much more!

Proudly sleaze rock with a liberal injection of metal and a dash of punk, Eightball Voodoo create an urgent contempary style. Throw Sunset strip rock, Jack Daniels, gritty real life lyrics, fuck you attitude and gasoline into a mixer and throw in a match and you get Eightball Voodoo.

The Voodoo rockers are here to take the scene by the throat and make sleaze vital for the new generation. Get ready to have your hearts and minds infected by the sleaze rock apocalypse that is Eightball Voodoo...

Laptop death has slowed EIGHTBALL VOODOO progress, but once I'm back online full time, expect a lot of new tracks in the near future :-) and if your feeling friendly, say hello to the band on FACEBOOK

Get some sleazy rock n roll!
Posted by Rob Silver at 8:56 PM