It's been a bit of a squeeze learning a load of tunes in a very short time, and to be fair, most of them aren't ready, but we're going to do it any way!

That's the all action crazy kinda guys we are

Set list was a bit of a stickcing point, and we lost two weeks arguing about what to play leaving just two weeks to learn them all, but it'll go something like this:

It's going to be soooooo much fun! 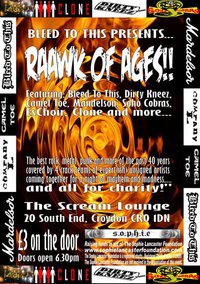