We just had a gig at THE WHITE SWAN in Aylesbury. It was an unusual show. We had booked it before Hazel joined the band and it turned out that she was having to jet off, well car and ferry off to Belgium because of work on the day of the gig.

It was only a small pub gig so rather than cancel, I stepped in to sing for one show. I was a bit unsure about it, but I thought fuck it, give it a go. I had been singing at rehearsals while we were looking for a singer, so I knew I could "sing" but doing it live while playing the guitar was another thing!

In the end it was OK I guess, I really had fun doing it and it was in tune, but not  a great vocal performance. I guess my rhythm playing suffered quite a bit. I think I rely on seeing the guitar neck a bit too much and looking at the video, I can see that I need to work on making sure that I my mouth is pointing at the mic when I shout in it!  An interesting learning experience, but I'll be very glad to have hazel back where she belongs for the next one.

So so vocals aside it was a great night with excellent performances from THE INFAMOUS and FOREVER VENDETTA.

It was also my second gig with my JET CITY AMPLIFICATION JCA20H and I used my LAG  ROXANE RF1000 for the first time since I played it at the gig where PISTOL KIXX broke up live on stage!
Here's a quick collection of excerpts from solos so you can here the JCA20H live on a guitar with P-90's

And here are 2 tracks from the gig:

In other news, Dickie got "I *HEART* Colin Vipurs" tattooed on his arse for a bet... well he says it was a bet, but there's no smoke without fire if you ask me...
Who would have thought Dickie had a thing for drummers. 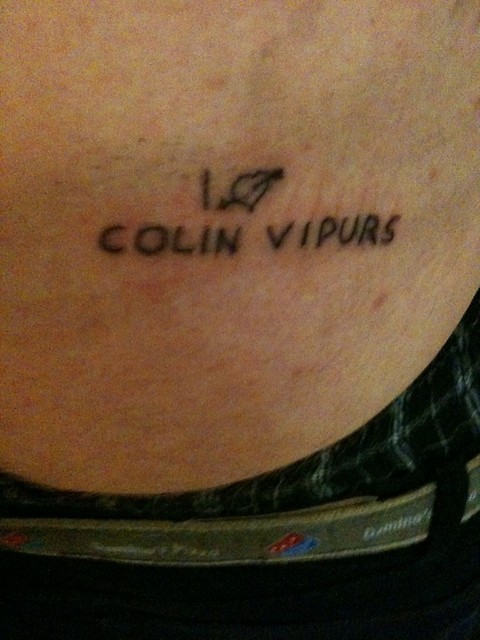 This is a lesson to anyone who get's drunk around tattoo equipment!
DON'T DO IT
See you all at AQUANET on May 8th!
Posted by Rob Silver at 1:32 AM