There I was innocently googling myself when I found a review of the Live EP "Live in Camden Town" which you can download for FREE here.
I was really pleased to see some good press outside Oxford, so word is starting to spread. You can check out the review here, or just scoll down an inch or two and have a read. 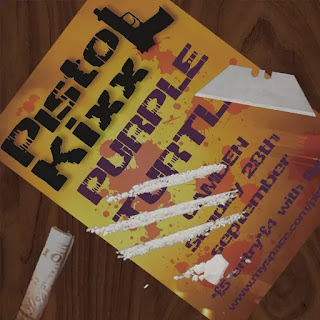 Live albums are supposed to be packed with the raw emotions and loud energy that was displayed when the band stepped out in front of their baying crowd. It should be a cementing fact to the followers of the band and never an intention to gain virgin listeners. This download album does everything it is supposed to. Crank it up loud and you feel that you are there, down at the front among the sweaty, Jack Daniels soaked mass. Pistol Kixx are the epitome of the sleaze punk genre and obviously put both barrels of energy into their live gigs.

Sounding like a moshpit of The Almighty and The Wildhearts mixed with a massive double whiskey shot helping of The New York Dolls for good measure, Pistol Kixx’s previous support slots with names such as Tyla and The Dogs D’amour only prove they’re worth their salt.

This live EP which was recorded in front of a highly charged Camden audience is as is just a taste of what the self confessed, dirty, booze fuelled rock monsters have to offer. Each song sees frontman Carli Hart firing out sex mad lyrics, over songs with titles such as ‘Back door beauty’ and ‘Strip club skank’. They don’t try to change the world, or make a political stance, instead they just remind you what Rock n Roll should be all about.

If you want to hear something that invokes your senses with the smells of leather jackets, spilt drinks, stubbed out cigarettes and smoke filled bars on the wrong side of town (even with a smoking ban?) then this is your medicine.